A fantastic day was had by all despite the lack of wind. Big thanks has got to go to RPS and Naish for providing us with a look at the 2012 gear. Warwick and Brendan and helpers did a great job of setting up and talking to us about the latest gear and giving us a crack on it. Pity that Naish awning had to go back. It looked real good in the back of Drift’s Van! 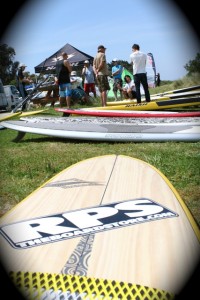 Big thanks to Dan and Simon for their time on the water with the beginners. We saw four kids and two adults give it a go and within a short time we had them up and going and turning around. Ian and Cara our BBQ master chefs cooked up a storm – well done and thanks to Mick for his mastery with the camera.
We saw 30 plus people rock up, despite the lack of wind, who were all out for a ball – it was great to see you and my apologies if I did not get around to you all and say hello.
To the advanced beginners that rocked up but we could not do much with you due to lack of wind we will squeeze you into the next clinic on Intermediates where there will be plenty of wind to get those beach starts happening.
In the morning with the lack of wind and a trailer load of SUP’s the Inlet was rocking with weird dudes standing up on boards with no sails racing around markers and the sand spit. It was great to see Natasha jump on a board and take to the water like a duck despite her previous shyness to getting wet. Special mention has to go to Natasha (and I guess Fireman Sam for bringing her along) for her catering prowess on the Saturday where offers of lunch and chocolate cake was given freely. Fireman perhaps we could organise things a little better and put Natasha on a SUP so she could do on water delivery of said cake and Lattes thus not disrupting our sailing time too much
In the afternoon the wind picked up to 10 kts and Inlet was taken over by more normal craft that had sails – mind you it was longboard territory and when the longboards come out so do a few pirates There where a few attempted dockings, boardings, walk the plank and general skull duggery going on to make it a fun afternoon. Pete and Dan had the Wally’s out and as usual in these conditions left the short boards for dead. I can see a few sailors heading for Ebay checking these 30 year old wonders out.
Highlights for me was hearing a proud Dad tell the story of how his son could not sleep the night before and was up early watching “Beginner to Winner” DVD. Watch out Lozza – future world champion coming up.


Well done to all and we look forward to our next clinic with the Intermediates on the 20th November.