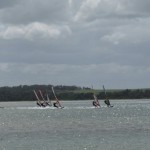 Well I am going to start this report off with the statement I normally leave to the end – What an awesome group of volunteer helpers I have! Yep it’s true and no more evident than in our latest event.
Mobiles were buzzing and emails were zipping through the webby thingy to make this happen for about 3 weeks beforehand. Big thanks to Postie Pete, Frank, Rob and Etsuko. To the Racing Sub Committee of Red, Jacques, Kato, Ado, Daffy just brilliant – another great day on the water. Then there were other people that just brought bags of flake to grill on the BBQ – delish Piere or freshly cooked cookies like Etsuko and Dazza(you are a wiz in the kitchen) along with the usual healthy banter and a touch of wind all to make a hugely successful day.
Well now to the windsurfing!
The wind was blowing westerly 12 – 20 kts with a bit of north in it that made it challenging for the less experienced. Rig choice was critical on the day and I suffered that issue along with a number of others.
The wind direction meant we were sailing down to the Yanakie channel rather than the usual speed run at the top of Inlet
After much discussion about markers the course racing got under way with 20 plus participants. The first half of the race was quite cruisy but when the fleet approached the second and third buoys the wind turned up a notch or two and there was a lot of crazy out of control windsurfers flying around. Ado won the first race with Kato and Daffy following along behind. In typical IWC thinking – those that came first will start last in the second race as we released everybody in reverse order. The local boys won through again with Kato, Daffy and Ado crossing the line 1st, 2nd and 3rd despite the official adjudicator holding their start a considerable time. Well done boys.
A bit of free sailing then lunch. I decided to take a run along the easterly bank and sling shot across to the usual WSW speed strip. My bruised and grazed shins told me this was not a good idea as I hit one of the easterly bank sand fingers at speed. Limped back for lunch and got everybody set up for the GPS Freerace.
Now this part of the program I was a little concerned about as the Freerace is run by KA72 software and I am a complete computer dinosaur. Flags went up and race was on. Concept with this is you can race anywhere within a defined area(the Inlet) and the software takes a reading from the individual’s GPS of your average speed over half an hour. The importance of long runs, good turns and speed all combine to make a good score and given the conditions the right choice of equipment was also critical. The flags came down and weary windsurfers limped back in all keen to see their score. The computer software worked a breeze(must have been the operator) and the official results were

Kato 25.03 kts
Daffy 23.63 kts
Kempsta 22.54 kts
Simon 20.65 kts(unofficial)
Rohan 20.54 kts
Dazza 18.75 kts
Col 18.2 kts
Roy 16.29 kts
Tony Smith 15.79 kts
Ado 11.71 kts
Ido 11.61 kts
Robbie 9.46 kts
Tony Ford 7.62 kts
Red 6.76 kts
Lots of smiles and aching bones at the end of the day as we packed up with suggestions from an ageing few that perhaps a 15 minute race would be more suitable!!
Special mention goes to Red and Roh who travel from Geelong to participate and also a big thanks to Vector Fins who donated a prize that Roh won. As I always say people, support our sponsors so they can support us. Check out Vector Fins website at www.vectorfins.com making some seriously fast fins.
Cannot wait until Race Day 3 – Stay tuned!