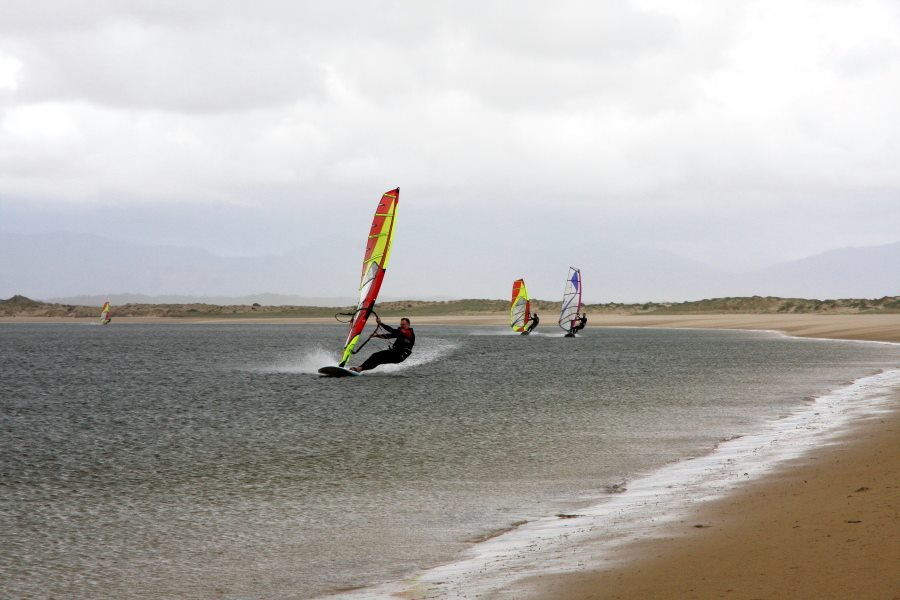 The day started with blue skies, puffy white clouds scudding across the sky, and the wind around 20 knots in exactly the right direction. It was even reasonably warmish. Some we’re already rigging by 10am and over the next half hour more rolled up, until we had enough for a GPS race.

In spite of the considerable amount of new gear on display, the weather held. The gods were with us. Craig and I fiddled with the race software while sailors got out onto the water for practice runs. The intricacies of system were sorted out after a phone call to Doug, and after a walk some distance down the beach, Craig raised the big green flag and the race was under way. This was a GPS race, so it was a matter of keeping up the highest speed for the longest time. The wind was surprisingly gusty, so at times was hard work in keeping control. It messed up quite a few of my gybes – or at least that was my excuse. It was also quite choppy in places, with little white caps all over.

The race ended and we all came in to register our times over lunch. After that, most people were keen to just get out and enjoy the rising wind – and so they did. The afternoon saw the wind pick up considerably, with all the sailors out, and some now overpowered. Then the blue sky disappeared, the clouds lowered, came in faster, then  came a strong weather front. A short while later another front came in – this time with cold, blasting winds, and finally, hail. The gods had changed their minds. Sailing in hail is a bit painful, so those who had made it in time were sheltering on the beach.

Overall, a great day’s sailing, though. Sandy Point really turned it on for us, with a bit of a wild finish to keep it interesting.