In usual IWC form everybody got out on the water despite the lack of winds.  Oh, I forgot one princess stood in the car park and watched – said something about his Pit Crew contract would not allow him to sail under 15 kts!  The long boards were out in the morning setting the pace with Pete complaining the Wally could not catch The Jerzy Jet but then Simon trumped me on the Mistral Competition Club with the retractable fin (a necessary accessory for Macca’s drive throughs).  Mick and Roy ventured out into the surf on their modern windsurf SUP’s and had a ball recording 16 – 18 kts on their gps’s on the way out and back.  The afternoon saw the wind jump to a consistent 12kts so the desperados like Dazza, Wendy, Frank, Pete, Ian, Simon, Ted, Fei, Shez and myself pulled out the short boards and got planing.  It was good Brass Monkeys weather as the water was freezing and soon sapped our strength and forced early retirements.  Tash fired up the BBQ and Wendy got us a sugar fix with some of her Master Chef Cake cooking. 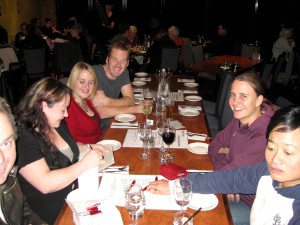 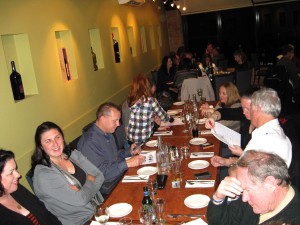 After a warm up coffee made by Barista Daz and a few priming glasses of red wine we staggered to the Inlet Hotel for dinner and the formal presentations for the evening.  It was great to see 30 members turn up and enjoy each other’s company over dinner as the conversation was loud and long.  The evening was even more enjoyable with Simon challenging us all with a list of windsurfing trivia questions.  (Ahem Team Doug and Dazza rocked it in with a runaway win) The formal club presentation was done back at Daz and Wendy’s place where Barista Daz whipped up the coffees in a flash.  As President, I always thought this was a truly respected position, a position that when you opened your mouth people fell silent in respect but not with the rabble rousers from IWC – it was a chance to give The Pres heaps of cheek.    It was great to take some time and review our fun packed season and remember some of the Club’s achievements.  My highlights being the Windsurfing for people with a disability and seeing 6  y.o.  Summer Hayward go windsurfing(by herself) for the first time!  With the highs also come the lows as we remembered the passing of Ray Fehlberg but we also talked about how we would be honouring him within the Club. 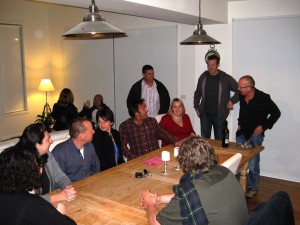 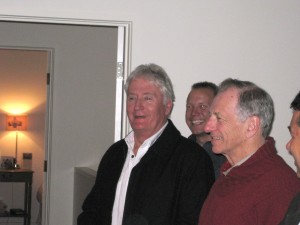 The Club received huge support from the retailers with RPS, SHQ and Zu Boardsports coming to the party with a Santa Sack full of prizes with no one walking away empty handed.  It was great to be able to give away some encouragement awards with Josh and Joel Worner, Sherelee Peter and Wendy Jepsen all receiving fantastic prizes from the retailers to help them get out on the water in style.  Well done to all!

The big moment was upon us where the music quietened, lights went dim, smoke machines started pumping and the drum roll increased its intensity(thanks to the girls on the Jepsen’s dining table)

The IWC Club Person of the Year 2011/12.  This award is given to a club member that has shown outstanding commitment to upholding the club values through the year.  The short list was Ian Fenney, Pete the Postman, Craig Kato Hollins, Roy Worner, Mick Green and Simon Chambers.  All worthy winners but with the vote going to the general membership only one person could win.  And the winner is …… (Pregnant pause as I open the envelope) Mick Green.  Well done Mick a truly worthy winner. 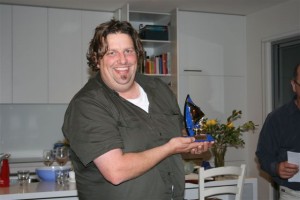 My next duty was to bestow the great honour for the Best Dummy Spit of the Year.  The Purple Dummy was awarded to Richie for his dummy spit over his lost sail on a massive day on the Inlet.  The fact that we played Richie along for months and then wrapped it up in a brand new box and cover to give back to him had nothing to do with fuelling the fire causing the tongue in cheek dummy spit on Seabreeze. 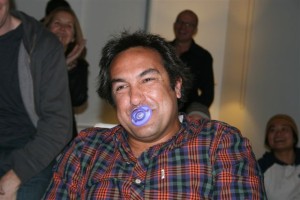 The mic was handed to Mike to present Craig ‘Kato’ Hollins with his prize for the first to reach 40 kts on the Inlet – a 40kph speed sign.  Craig filled us all in on the details of the truly awesome day and mentioned how his fellow sailors went on to post 43 kts(Ado) and 46 kt(Spotty) 2 second peaks.  As Mick commented that is only 10% off the world record.  Not bad for Anderson Inlet! 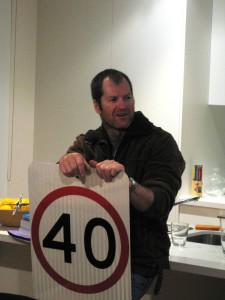 Whilst some retired at a respectable hour( the Pres) a few partied on to the wee hours of the morning and did not surface for breakfast at the Red Elk the next day.  When texted the only comment was food poisoning! 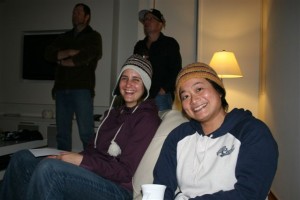 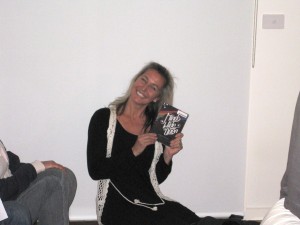 2 thoughts on “END OF SEASON BASH”