On Saturday night,(24th May) IWC turned on the time machine and dialled the settings for fun. We had the pleasure of around 40 guests for the End of Season Bash. The night started with an amazing fire-twirling display performed by Jayden, one of the club’s new up and coming juniors. Jayden dazzled us for about 10 minutes and was the perfect preview of just how much the Trivia would heat up later in the night. 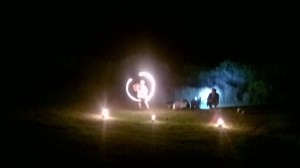 Next was a tasty roast dinner as catered by The Inlet Hotel. We had the choice of Chicken or Beef with a variety of vegetables and there was even a special dish for our Vegan members of a stir fry. with plenty of food to go around, many of the guests couldn’t resist the temptation of seconds. The Kids table on the otherhand were reluctant to go for seconds once they found out that there will be apple crumble for dessert.

Whilst the guests were enjoying dinner, Mick Green and Roy Worner, “The Southerly Buskers”, entertained by playing a few songs.

With dinner devoured, it was time to see which table was smart, cunning and really wanted to win. The first question for the night was probably the hardest. What is the name of your team. 7 teams competed for the night. Those teams were, “The Young Guns”(Juniors),   “Little Creachers” (Named after the beer that Sherralee was drinking that night), “The Inhabitants of Kato’s left nostril” (Dont even go there),  “The Flatheads” (something fishy about that name), “The Wannabe Champions”(um… Yep) , “The Ex Presidents”,( I wonder who captained that team?) and “The Dusty Disco Balls”(leaving that alone).

The Trivia rounds were fiercely contested with rounds including TV and Cinema, Memory test, Pop Culture, Australian Sport, Pot Luck and Food and Drink. There were also a few challenges thrown in as well. Etsuko challenged the chosen team members to hold a Yoga pose, judging them on finess, poise and balance, until only the best remained. There was also a paper aeroplane folding contest where the contestants were to constuct a “plane” that would fly the furthest and compete in a mystery challenge being which plane could land and stay closest to a given target. Much controversy was raised with this contest with the winner’s design being review by stewards, and legality of the winning  thow having to go to the video referee for a possible front foot line infringement.

The Music round was performed live by  The Southerly Buskers with some The Violent Femmes,Rage against the Machine, The Knack, Steppenwolf and even the theme song to “Skippy” thrown in. I am told that during the night, the buskers collected a massive $11.25 for the evening.

IWC Club Member of the year This year’s Club Member of the Year was awarded to Pete “Naz” Nathan. Pete has been working hard behind the scenes all year co-ordinating all aspects of membership, Winning his first club title (2013 Brass Monkey’s Champion) and his sailing has improved out of sight whilst still maintaining a strong presence in the Club/ Commitee. Congratulations Pete!

The Trivia night was won by

“The inhabitants of Katos Left Nostril” just beating  “The Flatheads” by the closest of margins being 1 question.

The QUESTION that most people answered wrong on the night was-

Which country consumes , per capita, the most quantity of donuts per year? – Australia – U.S.A  -Canada or -England

A Huge thanks to Beverley, Jayden, Mick, Roy, Antoine, Tash, Carmel, Shaz, Doug, and for anyone I’ve fotgotten for helping to make the night a huge success.