So after getting the green light from Tash to head away for a week of sun, sand, surf and sailing with some of the IWC crew (on the basis that I make it up by taking the family to Qld for two weeks afterwards lol), I found myself as excited as a schoolboy at the prospect of heading away for my first real ‘long-distance’ windsurfing road trip.

It didn’t take much convincing to get a co-pilot in Frank K and we managed to align our annual
leave so we could carpool for fuel and storage of kit.
We managed to pack everything from the kitchen sink to surfing short boards, wave, slalom, free ride windsurf equipment and SUP’s, to cover every eventuality over the 5 days. 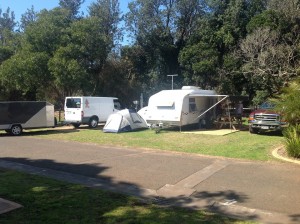 Unfortunately we had to take the long way getting there with a day spent in my Albury office, before the last leg through Macquarie Pass (don’t try that run with a heavy load or caravan – murder on the brakes), we arrived at Seven Mile Caravan Park in Gerroa NSW around 8pm.  With Postie Pete and Tony Ford watching on offering words of wisdom and mockery, we managed to quickly get the tents setup and had a celebratory refreshing beverage 🙂
Next morning we woke to the sound of crashing surf only 50 metres behind us, so after breakfast we had a poke about the Gerroa beach break.  Seems the spot is popular with local surf schools and wave sailors alike – with two large groups of around 50 surfers out all day. The beach is quite long, so plenty room for everyone.
We had managed to miss the Westerlies that had Postie lit up on the speed strip at Primbee (nice nautical mile of 31kn by the way!), so with a sitting High Pressure we had sunny blue skies and 25 degrees to spend a couple of days surfing and SUP’ing on the breaks, along with a drive up and down the coast to investigate ‘spots for next time’.
If you’re the kind of person that also likes to chase a little white ball around, there is a golf course just up the road, with stunning backdrops over the cliffs and open oceans (reminiscent of St Andrews without the cold and miserable rain).
With plenty of walks, wineries and with Wollongong and Sydney City not too far away, there is plenty to do for sailors and non sailors alike.  We had a great time ‘meeting the neighbours’ in the caravan park, with the evenings spent trying to tune Petes tv aerial, or trying to look interested watching the NRL deep in the heart of rugby country 🙂
Following the loss of a surf leash (Postie) and a surf bucket hat (myself), we also got the chance to spend some time at the local surf store (larger then Island Boards on Phillip Island), real helpful staff who were also local Gerroa wave sailors itching to get out into it, which almost saw Postie upgrading his gun 7’10” for a new 8’6″ log and I too was seriously in love with the new FireWire Mini Mals… But managing to keep our pretty pennies for another day, headed back to the camp site for another hearty meal (thanks to Chef Tash who had kindly pre-prepared meals, possibly knowing the likelihood of 3 blokes spending the time to create healthy meal options !).
Overall we had NE wind on two days for Sanctuary Point (aka St Georges Basin).  First day was a light wind SUP Sail, which was good as a slow speed look around the lake. Basically it has around 400m of fairly shallow water up to waist / chest deep, to a central navigational channel marker, then there is a slightly deeper run over to the other side of the basin.  With a sheltered spot for rigging and entering the water (and sweet smooooth gybes), it’s a great spot for beginners, inters and the speed freaks heading out to the westerly weed bed.  Whilst not as flat as Primbee or Invy when the sand bars are up, the small 1ft chop is fairly forgiving and gave us a little bump’n’jump on the in/out run.

The second day sailing at Sanctuary Point was another weekday, but that didn’t stop the locals from heading out to keep us company – or I think they were worried were trying to claim the spot when I put the IWC flags up lol.  Around 10 sailors in and off throughout the day with varying experience levels and even some retro kit made an appearance.  Slightly gusty NNE of around 15-18kns kept us happily planing on 6’s and 7’s (or a 4.4 if you’re Arkan!).
This last session worked out well with timing the end of the trip, and with a low pressure and ‘unsailable’ wind directions forecasted, we decided to head back together on the Tuesday.
Overall I’d recommend to all our members to consider heading away like this to explore new spots – and yes, IWC Committee will be supporting / arranging another trip next year to Gerroa following Postie Pete’s acceptane of the title of Tour Director, along with rumours of some seasoned members heading up in a few months time if you’re super keen.
(Thanks to Dannie and Matt Connolly – South Coast Sailboarders for the Images)