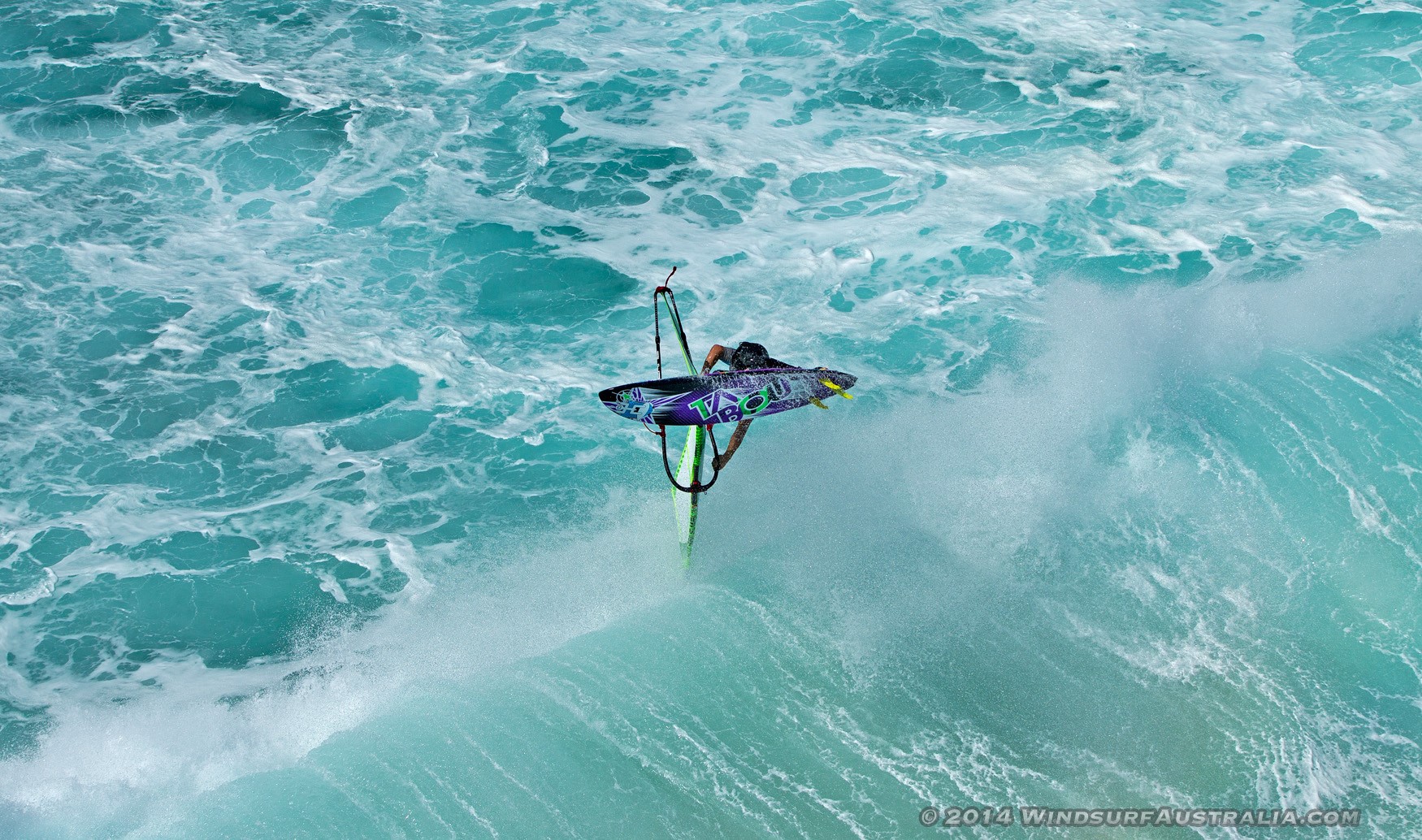 OK. It wasn’t that simple. It took the combined efforts of two dear friends – scheming – to get me to the event: no pressure to enter: “Just come and look!” So I looked. It was Cat Bay, about 10 – 12 knots, and ROCKS!

“Don’t worry about the rocks? Just enter … you don’t have to got out if you don’t want to…”

I registered – and watched. I’d always wondered why wave sailors had such big feet, I began to understand: it’s to allow for all the suction pads, like frogs, so they can spread the surface area when walking out of the ocean, carrying their gear overhead – on ROCKS!  I watched a bit more when someone suggested I rig. Which I did, because the wind was dropping – below 10 knots and I really didn’t think any one would be sailing. I was wrong – off they went. The waves looked really nice for me – not too big, no white water, and the ocean was so clear. “Hmm … I thought, not so bad …. I just had to be able to pull off very wobbly light wind gybes at the end of the waves next to the ROCKS!”

Wobbling out, I hoped that hours of practicing light wind stuff would actually work, I wasn’t convinced and stayed well away from the rocks as I bobbed around watching everyone else catch waves. This was all too hard and nerve wrecking. I went back to the beach.  Resembling a dishevelled fairy penguin – whose just seen a white pointer – I huddled amongst the grasses on the sand dunes. The competition was postponed – this was my chance. Nipping quietly up the stairs – while my scheming friend was still bobbing around on the water – with gear under my arm – I was heading to the car for a stealthy get away when a charming man intervened. Pointing at the flags he said – gently but firmly: “Next heat is yours, off you go, don’t want to miss it do you?” That’s exactly what I wanted to do! He was so polite as he ushered me back down the steps. Talk about dead woman walking.

The wind seemed horribly light, but to my surprise I had no problem wobbling off the beach and getting to the start area.  I’m not sure what happened after that. I’ve raced dinghies a lot, not for 10 years, but until then – a lot. The flag system had been explained to me; and after years and years of watching flags drop on crowded start lines I had no problem with that. I did use to wear a watch, so I’d have to “guestimate” the final minute. I remembered the 96 Atlanta Olympics medal race in the Men’s Finn class; the sailor leading on points was a Polish sailor. His watch stopped working just before the 1 minute flag – he stayed on the line and counted down: he won the gold. I was trying to remember his name when I noticed the Yellow Flag had dropped and it was Green!  Green meant GO: time to catch waves. I honestly don’t know what happened at that moment – maybe Green Flag fever, but I forgot about rocks, wobbly gybes and tacks, and just went for it.  16 minutes seemed like an hour! To say it was intense is an understatement. I don’t know how to wave ride so I just tried …. “tried” … to catch some waves. I didn’t even think about rocks and gybes. It all just happened: catch a wave, get off it, turn, get back up wind, turn, catch a wave. The only thing I can remember is feeling HOT! I was sweating. The day had been overcast so I’d gone for my winter wetsuit: no idea how much I would be working and loving it. It was fun, and I genuinely surprised myself – even tacking. Can’t over estimate how much the light wind practice helps – especially when you have a 16 minute timeframe to work in.  The red flag went up and I caught one more little wave and sailed off downwind to a patch of sand and a set of steps below the judging tents. Not sure what planet I was on as I made my way ashore … over rocks … but it was rather a lovely planet as a fairy penguin was waiting to greet me at the bottom of the steps.

When I did get back to the judges tent and car park, my scheming friend, Lisa, pointed to a large white board with lots of names and colours on it.  She kept pointing at it and saying how well I’d  done; a few other people said the same thing. I  asked what I was meant to be looking at: the heat results! Kim, who had travelled from SA for the event, also came to congratulate me. I was feeling rather pleased for a number of reasons:

I wasn’t expecting this though:
“When do you want to sail your next heat?”
“What? You mean I have to do that all over again?”
Lisa was sneaking off – she had neglected to tell me that part!

The next heat was scheduled for Friday at Woolamai. I’d never been to Woolamai. Everyone told me there were no rocks – so what could possibly go wrong? The wind was fickle on Friday – so I squeezed in a quick meeting at Inverloch (thank you Mick). Then went back to Woolamai and watched. Was it my imagination or did it look quite big? It was inspiring to watch people compete in super light conditions and what looked like reasonably big waves to me. When Ben Severne came in and said: “There is no wind out there now”, I secretly hoped our heat would be cancelled: rocks were suddenly looking a lot more appealing than this beach break. It was cancelled. Learnt a lot watching everyone who was out there and was ready for Saturday. 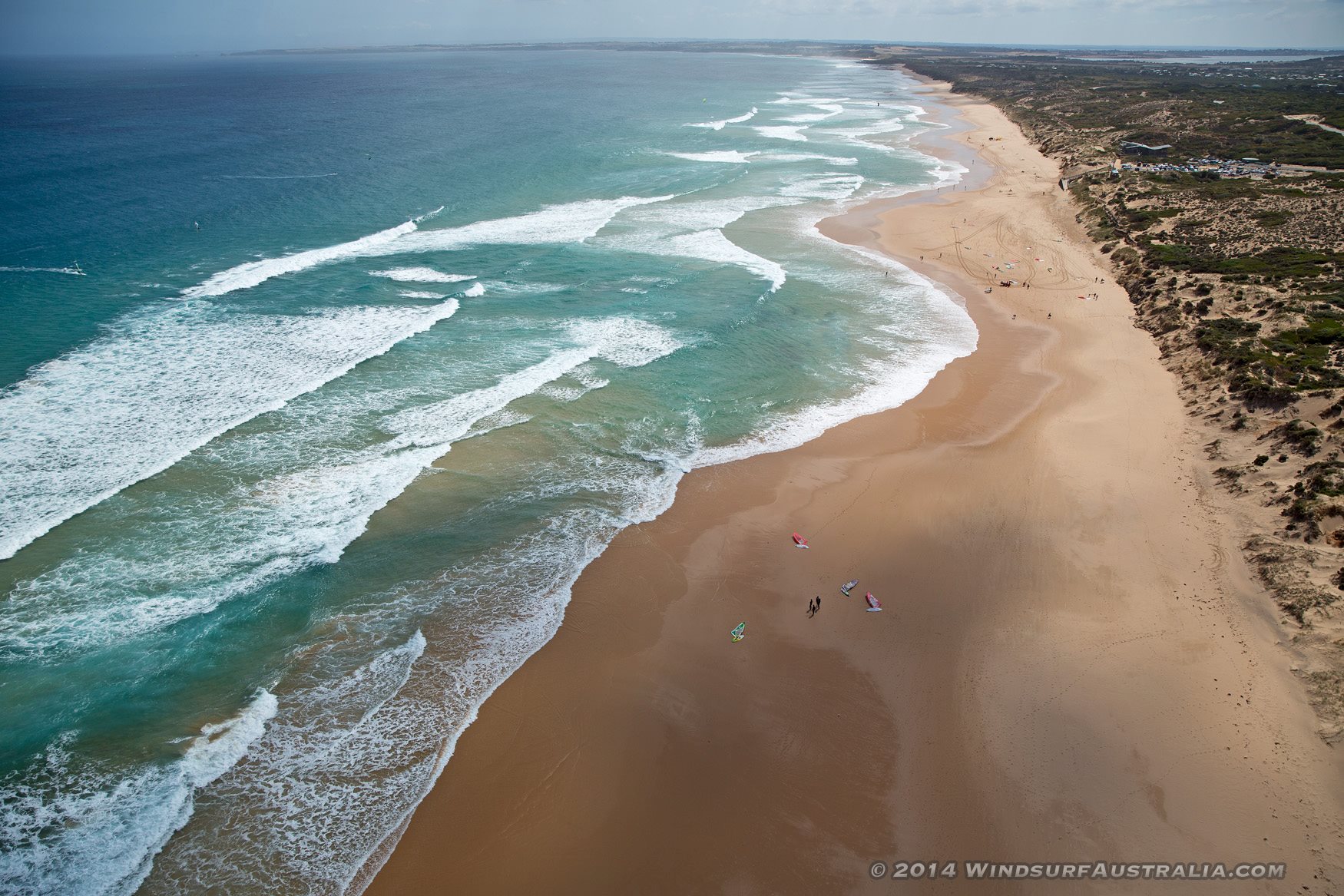 Saturday was on. Had a text from Kim to say Woolamai didn’t look as bad as the previous day and our heat was on early pm. The sun was out, the wind was probably around 15 knots or so when I arrived. I rigged a 4.7. Cat Bay had been a 5.3. I worked out my tactics: either I played around in the white water or I tried to catch one big wave. One would do it, and they didn’t look that bad from the car park! After all, what could possibly go wrong …

The Green Flag went up and I thought I was in a reasonable position, so I quickly checked behind me to see what waves were about: a rather large one was RIGHT behind me. I was surprised – this was bigger than I thought. I hadn’t allowed for pfaff time so I missed it. Another one right behind it: these really were bigger than I’d anticipated. I did try and catch them, but kept missing. I was heading towards the white water and decided I’d better get back out – so without thinking I tacked! I was heading back out before I even realised I’d managed it. Happy girl.

This heat was 12 minutes, and Kim had decided on the white water surf option, so I needed to catch a wave quickly. I positioned myself – somewhere in the recess of my mind I remember a certain Mr Cribb saying something about not catching the first big wave in a set because if it went  pear shaped all the others would come down on you too – but this was against the clock: I didn’t have time to be selective!  A wave was on its way, they seemed to be getting bigger and they were a different shape to any thing I’d seen before – I haven’t done much wave sailing! One final glimpse and I started to pump – this wave was rather big so I dug my size 3.5 feet into the straps as hard I could – leant forward and kept pumping: something wasn’t right.  It was like a cartoon bubble in my brain: “I wasn’t in the right place, either I needed to be further in or further out – I was in the impact zone and not a good place to be to catch a wave.” I don’t remember much after that really – I remember thinking this is steep – should be I leaning back or forward? And then the cartoon bubble in my brain changed to lots of white bubbles all around me…

Eventually I surfaced and could see my gear 100 or so meters away – it seemed to have got stuck in the rip  and didn’t seem to be going any where. I started to swim and OK, so the aforementioned Mr Cribb was right: if it goes pear  shaped on the first wave the rest of the set will get you. They did, and I did as he had suggested in his course and turned around and faced them, ducking underneath them. Mental note to self, and Mr. Cribb, when they are mast height and heavy I will duck a little deeper than he suggested – especially for the first one!

When I got to my gear the Green Flag was still up – yes I’d been watching it, so I water started and got through some white water to try and catch one wave. I did – but the Red Flag had gone up, still I got a nice ride in.

Morals of the story –

To sum up, the 2014 Wave Nationals….Great event. The last day at Woolamai was truly epic: the helicopter was over head filming as the final heats started: mast head hollow waves, surfers in the barrels, sunshine, 20 knots – it was action plus. I’d never seen any thing like it. Yes I went back out, yes I got washed up all over again – because I ignored the theory – but sometimes you just have to do that, don’t you! 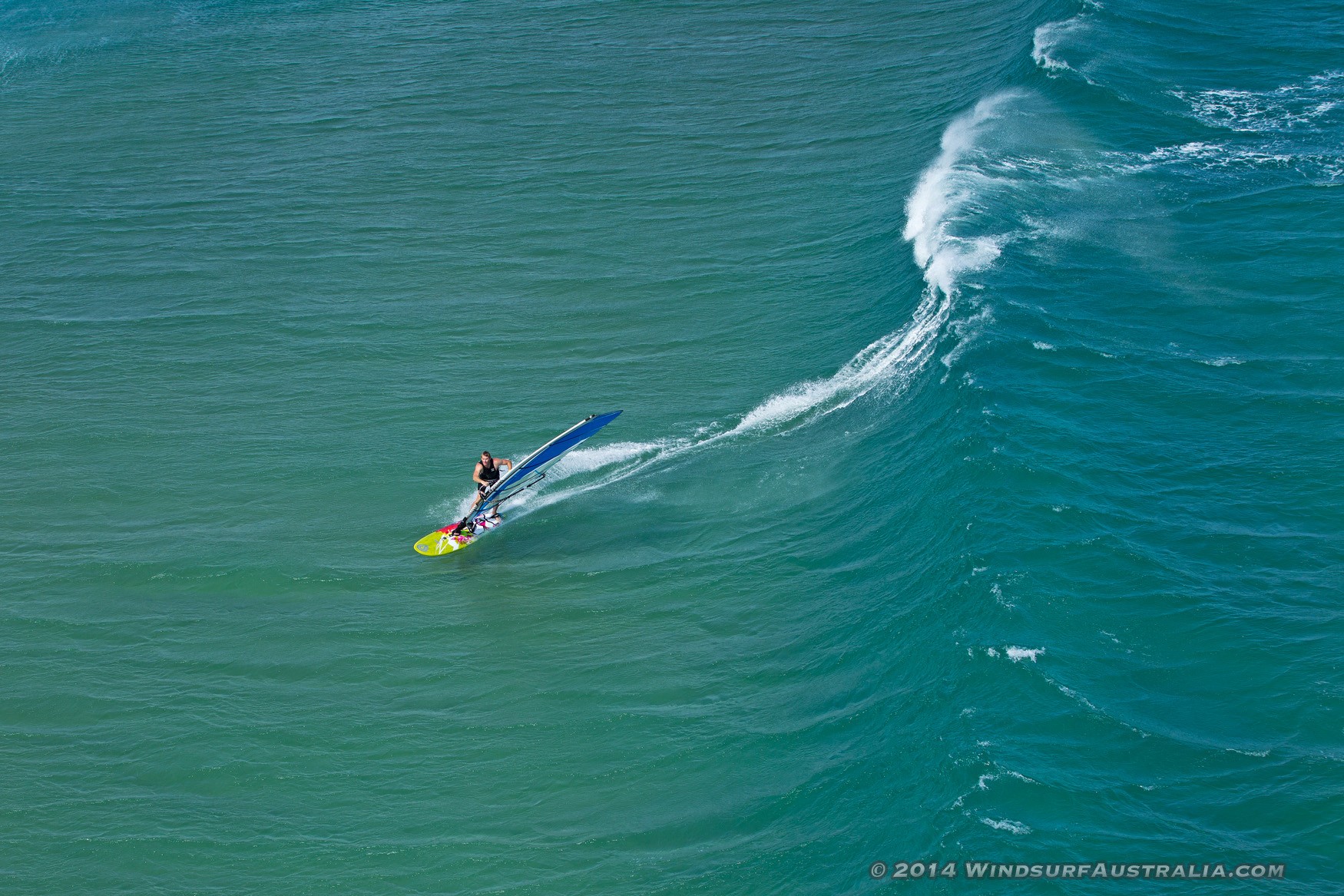 Huge thank you to Al McLeod (Neil Pryde and SHQ) for getting the event at Phillip Island. Al finished 5th Overall – a great effort given that he was also organising it. I know Hudson and his Dad, David, where heavily involved in the organisation, too. Hudson was also competing. Lots of sponsors – the official site has more details of these and results – www.windandsurffestival.com

2015 Australian Wave Nationals
I think the 2015 Wave Nationals are in Lancelin, WA. What can I say? I’ve already floated over Island Reef there, and clipped South Passage Reef, too – so what else could possibly go wrong?

Oh! Who won this year’s event? Some bloke called Ben Severne.
Am I still friends with my two scheming friends? Yes, congratulations to Lisa who won the Women’s Wave Nationals – it’s always a pleasure to watch her sail.

More images and information, including video about the event. The images shown here have come from:

Col Leonhardt’s (Windsurf – Australia) aerial shots from the final day of the Wave Nationals at Woolamai.
For those of you not interested in wave shots, he took some great aerial footage of  Craig “Spotty” Spottiswood sailing off the Island too. You Can check out his full gallery at: https://www.facebook.com/pages/Windsurf-Australia/299496563413912

I know you are all waiting with bated breathe to find out how my heat finished?

Did she win or lose?  Did her plan (one big wave V surf white water) work?

I lost. My plan – was good in theory – but the waves were out of my league – so it didn’t work this year. But there is always next year.

Would I do any thing differently? NO. Well, I’d love to learn to wave ride so I don’t have to do wave sub aqua all the time – but I’m sure I’ll have mastered the rudiments of that by next year’s nationals. Am I going? Absolutely! IWC will be represented.

PS:  Wave sailing at Easter. Robe South Australia
The ONBOARD Robe Easter Classic is on again – 3 Days of Waves sailing!
Going down to Robe let me know if you need more info and want to come.
Tags: Gritty Truth, grittytruth