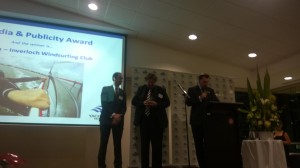 Off we went to the Yachting Victoria 2014 Awards night with wives and boys dressed to the nines (Mick commented he was going to wear his 2/3 wetty but could not fit a bow tie to it!) at Sandringham Yacht Club with 350 other people. An amazing facility and spectacularly decked out as we climbed the spiral staircase to the top floor. Dreams of Inverloch Club house came to mind!

This was the awards night for the Yachting community and the who’s who of the yachting world where thick in the air with the odd olympian thrown in.   Inverloch Windsurfing Club had nominated its own Mick ” Drift” Green for the Media and Publicity Award. The short list of nominees were Drift – IWC McCrae Yacht Club Ocean Racing Club of Vic – a goliath in the media industry.. So this was going to be a David and Goliath battle. Mick in his usual strategy asked Kato and myself to take the competition out in some form of surreptitious dealing, however the new club president – Kato, has a lot more morals than the previous one and called foul much to Drift and my disappointment.

So he had to win this award on his own credentals hmm tough ask. The rest is history as David slew Goliath and Mick walked away with the award. Now Mick is one of those quiet achievers that just goes about his business so I will embarrass him slightly here and mention a few of the things the Yachting Victoria selection board picked up on:-

Mick was one of the founding members of IWC and has been a major driving force in the club’s development and growth. Mick developed the club’s media strategy when the club was formed in 2008. Considerable time and effort has gone into developing relationships with people in the media to give the club exposure it enjoys today. The IWC media strategy has been to develop an integrated web and social media presence to serve specific communication purposes. IWC does not have a club house and its membership is 20 % local, 75% Melbourne and 5% interstate and overseas. Therefore e-communication with membership is of vital importance. Mick has developed a range of communication options for the committee to communicate back to the club’s membership or membership to communicate with each other. Website, Facebook, Wheremi Windsurfing, “The Gritty Truth” Newsletter by Mail Chimp and “From the President’s Desk” by email. As a result, IWC has become a content creator- developing a strong reputation with local newspapers through providing interesting and engaging copy and press releases. IWC also produces it’s own visual content- from digital still images to gps integrated applications. It has also been a major promoter of windsurfing to a broader audience, through the creation of audio and video content for the national broadcaster as part of ABC OPEN. Throughout 2013-14, this content aired on ABC local radio, and screened on ABC1, ABC2 and NEWS24

Congratulations Mick – well deserved and Sue and I were very proud to be there last night to see you receive this award.