It is with great sorrow that we acknowledge the passing of esteemed club member- Ray Fehlberg- who passed away suddenly last Sunday.

Ray was a bit of an adventurer, and was frequently seen on the Inlet when every one else was still at work.  He attended many club events- including the first few sailing sessions at Area45.  He liked going quick and had a bit of a competitive streak- which meant he wouldn’t let anyone get past him!  This lead to some great neck and neck runs down the strip at Area45 with Ray, and inevitable some great stacks when he shut the gate on you.

He wasn’t a spectator….Ray contributed to the Club in so many ways.  He attended the first committee meeting and contributed many ideas to the formation of the club.

Here’s an article he wrote for the Club Newsletter:

Wind blowing hard from the East, gusty often, then lulls.  Yes, this is mentoring day, Maher’s Landing, Inverloch, Sunday 7th February 2010.  A crew of over 20 people arrive and the car park is full of cars packed to the gunnels with windsurfing gear.  This is windsurfing painted on a big canvas – nearly every bit as big as Sandy Point.  Long runs, strong tides, strong winds.  Today the wind is blowing with the tide.  There will be a premium on getting up wind/up tide.

For those who have only sailed on the duck pond, this is a bit daunting.  It would be scary if you were by yourself, but there is strength in numbers and everyone takes confidence from this.  Craig talks about the bay that we will be sailing in.  Sand banks to watch out for and mud flats to avoid.  Mick talks about guidelines for sailing together, safety rules so we do not crash into each other.  Doug outlines how the day is going to run and allocates each person to a mentor.

It’s now time to rig – the Inverloch Windsurfing Club is about to see action.  Hints are given on how to get a better set on your sail.  Time to hit the water.  Everyone quickly discovers that getting up wind and up current is a battle.  Some battle better than others.  Others happily accept that walking your rig back to the launch point is a good idea.  There are plenty of sand banks to aim for, and some good ones to avoid if you are travelling at speed.

Strong wind and flat water – this is windsurfing paradise.  Those who can drive upwind get on the cross run towards Venus Bay and start going really fast, only just in control.  The leaders demand more – if you want to gybe turn you must go faster still!!   Turn a bit more downwind – more speed, more speed.  Carve, release sail, crash.  Big wipe-outs but everyone is still smiling.

Do it again. Get you stance and posture better; get more weight on you harness lines.  Look over your shoulder to get a better body position.  Simon almost makes it around.

Those on the beach are leaning how to better beach start.  Great day for it in the morning.  In the afternoon the gusts are so strong that water starting from the beach is a better option for those up to it.

There is the happy vibe of success in the air as lunch time draws.  The smell of fresh cooked snags on the barbecue is irresistible.  Much happy chatter from all involved.  Where’s Mick?  Still on the water – cunning bugger gets the best gps run of the day.

A number of people rig smaller sails.  The wind is strengthening again. The speed sailors are in full flight, charging on the long cross run and back to Venus Bay.  Eventually everyone is exhausted and happy.  Smiles all around.   Arms have been fully pulled out of sockets.  Many new skills learned.  Respect for “big sailing” increased.

Another great day windsurfing at Inverloch. 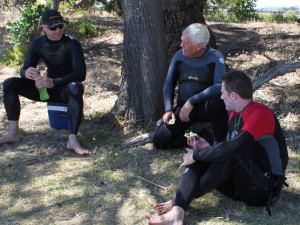 Ray (centre) with Kato (at left) and John R (at right)

Rest In Peace, Ray.
In memory of a top bloke with a passion for windsurfing (and Inverloch)

May you have fair seas and a strong breeze.