What’s an acceptable number of boards and sails that one sailor can own?

Whilst some of our members are pushing the boundaries on what is achievable, the sight of a tandem trailer stocked to the top with windsurf gear is still awe inspiring….
Now in its fourth year, the SHQ Learn to Windsurf trailer made its way to Inverloch in January, full of heaps of goodies from Neil Pryde, JP and Tabou. Over 80 people over two days participated in structured lessons, or demo-ing of new sails and boards.

Many more simply came down to chat, or watch the spectacle! 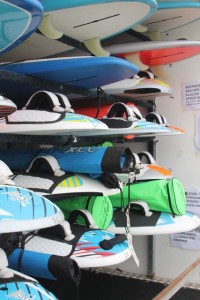 Conditions were light, a west – south westerly of about 10 knots greeted us on Saturday morning. This soon built to 12-15 knots by late morning, allowing some of the crew to try out the gear in planing conditions. Some ventured over to the outer bank in search of more wind and a longer run, whilst others took their chances with the famously shallow fin eating inner sandbank!
Committee and founding member, Ian Fenney arrived after things had kicked off. “It was fantastic” he said, “coming down to the beach early in the afternoon and seeing every board from the trailer on the water”. 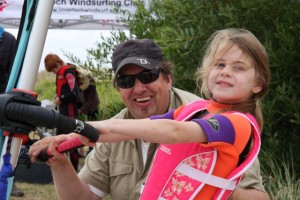 Age did not seem to be a barrier. Summer Haywood, aged 5, with the help of coach Mick, Roy and her dad, Paul, held her 0.5m rig, took a perfect 7 stance, and sailed around the Inlet, even clocking a GPS speed of 2.35 knots! This year, some of our younger members took on the challenge of teaching their peers. The triple J’s- Josh, Joel and James did a fantastic job of teaching the basics to some junior participants, and shared the buzz by showing just how highly addictive our sport can be.
Josh Worner has only been windsurfing a short time, but was quick to impart what he has learnt. “I think it’s important that kids teach kids when possible, because it is easier to listen to somebody your own age rather than an adult.” he says. ” You can relate to them and sort of know what they’re thinking. Because I’d have to admit it, I’ve sat on my board complaining to myself “but you’re older” and “you don’t know how it feels”. It’s also good because it shows to them that people their own age can do this, and it is possible to do it and be as good, if not better than the adults.”

Josh’s younger brother, Joel continues, “The most enjoyable part for me, was when the student and I have put a lot of effort/time, as well as heaps of gnarly stacks (falling in is part of the fun). However at the end of the lesson when the student can jump on a windsurfer, start sailing and turn back. It makes you proud and it goes to show that all of this time has paid off.”

Back on the beach, the BBQ crew made up of Cara, Natasa and Shaz cooked up a storm. So much so that the sausages were sold out in no time.

The breeze hung around after lunch, so many of the participants hit the water for a second time. Victories up and down the beach, with the beginners learning to travel forward and turn around.

At the end of Saturday, weary arms lifted all the gear back into the trailer, all ready for the next big day…

Sunday dawned with conditions similar to the day before. It was fantastic to see many of the beginners from the day before turn up for another go! Thanks to the great work of the coaches, many of them were tacking and gybing, and once off the water, and totally hooked. Some were considering how best to continue on…. Perhaps for next year, the SHQ trailer should have EFTPOS!

Club president, Doug “Old Salty” Hocken was impressed with the turn out, and the level of commitment by volunteers in the Club, who gave up most of their weekend to introduce the public to the sport. “It was so fantastic to see so many kids and families being taught and the fun being had on the water. It sows the seed for them to take up the sport in the future.” He continues, “The efforts by the coaches to spend 2 days on the water teaching was simply awesome… They were driven mainly by the enthusiasm of some of the students that kept coming back for more!”

So, once again, another fantastic weekend on the Inlet… Extreme thanks must go to SHQ for handing over the keys to the trailer and letting us loose on all the toys! With close to one hundred people coming down and being part of our event, we refuse to believe that our sport is at any risk of dying out. Especially when there is such a great bunch of guys and girls who are always out there, sniffing out the next breeze.