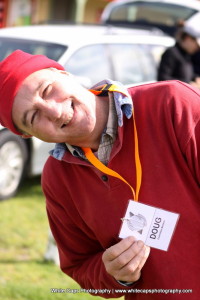 First I would to start this, my last President’s report with the recognition of our founding members

And to recognise all the committee members over the last 6 years that helped make this a great club, a club that is spoken of all around Australia and overseas

All committee members have made important contributions to the club’s development over the years and I would like to thank them for their efforts as well as supporting myself as President.

To see this club grow from a hand full of windsurfers passionate about their sport to a club that now stands at 190 members is mind blowing.  When we first introduced club fees I expected to see our club numbers fall away but instead they have steady grown with 90 paid members last year and it looks like we will be well on track to improve on that number this year.  The fascinating thing for me is the growing number of interstate and overseas members as well.   As a club we have definitely done something right when you hear stories of the sport dying yet here at Invy its doing the opposite.

Some of the highlights for me over the years

So many more but I will not bore you.  But I guess the biggest highlight for me is the new and lifelong friends I have made.  Windsurfing can be a lonely sport and it is easy to slip away at the end of the day without being noticed.   Something I cannot do anymore.

The decision to retire was not taken easily.  It was a decision based on what was good for the Club.  People staying on too long in the one position can make the organisation stale and I did not want this to happen to a Club I love so much.  New blood brings fresh ideas and new ways of doing things.  Something I am looking forward to, is seeing the Club move ahead in new and exciting ways.  There is so much more for the Club to achieve and we need the next runner in the relay race to step up take the baton and run the next stage of the race.

Some of the ideas committee has been working on.

So much work to be done and it can only be achieved by a strong committee.  We as a club cannot assume that the good committee we have at the moment will continue the good work that has been done so far.  As with all things in life what you get out of the club is what you put in. We as club members have been fortunate to have members that have been willing to put in and put in lots.  Do not leave a few do so much, come and join in the fun and be part of shaping this wonderful club for the future.

I have visions of a double storey windsurfing club on the foreshore with a large grassed rigging area, equipment shop, rental facility, The Josh, Joel and James pro shop giving lessons, a café serving hot soup in winter and gelati in summer, change rooms with hot showers, storage facilities and a club room with committee name boards on the wall with everybody’s name on them that attended today.  Some say I am a dreamer and it’s too big a dream to happen.  I say WHY NOT.

Lastly I would like to thank Sue my wife for her understanding during this journey and you, all the members, for your support in making this such a memorable and enriching experience in my life.

It is good bye as President but it will be hello as Past President as I take on a supporting role for the new President!

Thank you for Old Salty

The following farewell was prepared for our long serving and dedicated President….

Wouldn’t it be good if…?

It’s a term that’s bandied around a lot…normally thrown at a far off dream, and then discarded once realized it’s too much hard work or too far away…

Well, just over 6 years ago, Doug and few notable others, sat out on the sandbar and asked that question…wouldn’t it be good if?

Wouldn’t it be good if there was a group of people to sail with?

Wouldn’t it be good if there was a way to support those new to the sport?

Wouldn’t it be good to celebrate this fantastic location that’s right on our doorstep?

We are all fortunate that Doug chose to not only ask those questions, but also set out to answer them.

If we fast forward to today, here we are part of the largest windsurfing club in Australia.  We have a reputation and respect from the International windsurfing community…closer to home, we have a gone a long way in pushing our sport up the ranks in the mainstream, and ensuring it gets the exposure it deserves.

Old Salty will be the first one to say that it is not the work of one person but the work of many but I think it is important to stop and take notice of the enormous effort that our president has put in over the last half decade.  A ship is only as good as it’s skipper…and I reckon we have a pretty good ship.

Of course, there have been some rather…ahem…memorable moments in our president’s reign….and I’ve had nothing to do with any of them…honest!

My most memorable was the limited edition Dougie stickers, which have now appeared all over Australia as well as internationally  in Japan, New Zealand and on the main road sign on the way to Ho’okipa in Hawaii..

I’m sure we all have our own Old Salty stories, and isn’t that’s what it is all about?  Doug is normally the last one on the water…and it’s only partially because he is a slow rigger…it’s mainly because he makes US his business and ensures that we ALL connect, share, chat and share a laugh- drawn together by our obsession of the wind and water.

Behind the scenes, I’m sure how many of us stop to consider the huge amount of time, energy, passion and enthusiasm our president has put in…I think we need to acknowledge the support of the Hocken family, in particularly Sue, who has no doubt had to put up with the many absent hours and stresses that befall a leader.  I’m sure I’m the voice of many when I pass on my sincere thanks to Sue for her patience! 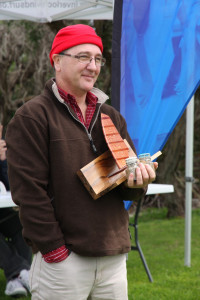 On a personal level,I feel honoured to have worked alongside Doug. There is an infectious energy that surrounds someone who is prepared to have a red hot

go, and I feel that we have done precisely that…on the plus side, I not only gained a leader in my life, but a great mate, a comedy sidekick, a sounding board, and a crazy participant in our mis-adventures!
So, finally, as a token of appreciation, I like to present you with this artefact.  Handmade, the timbers have been hand crafted, the sand is from the bank where it all started all those years ago.  We give you this so that you will always have a part of this club, this place, these people, no matter where you go.

In recognition of your service to our club and community, we have also nominated you in the State Government 2013 Community Sport & Rec Awards which recognises leaders in Community Sport.

There’s nothing more to say except a simple and heartfelt thanks, and on behalf of the club we would like to recognise your passion, drive, energy and enthusiasm that has steered us so well over the last half decade…Thank you….