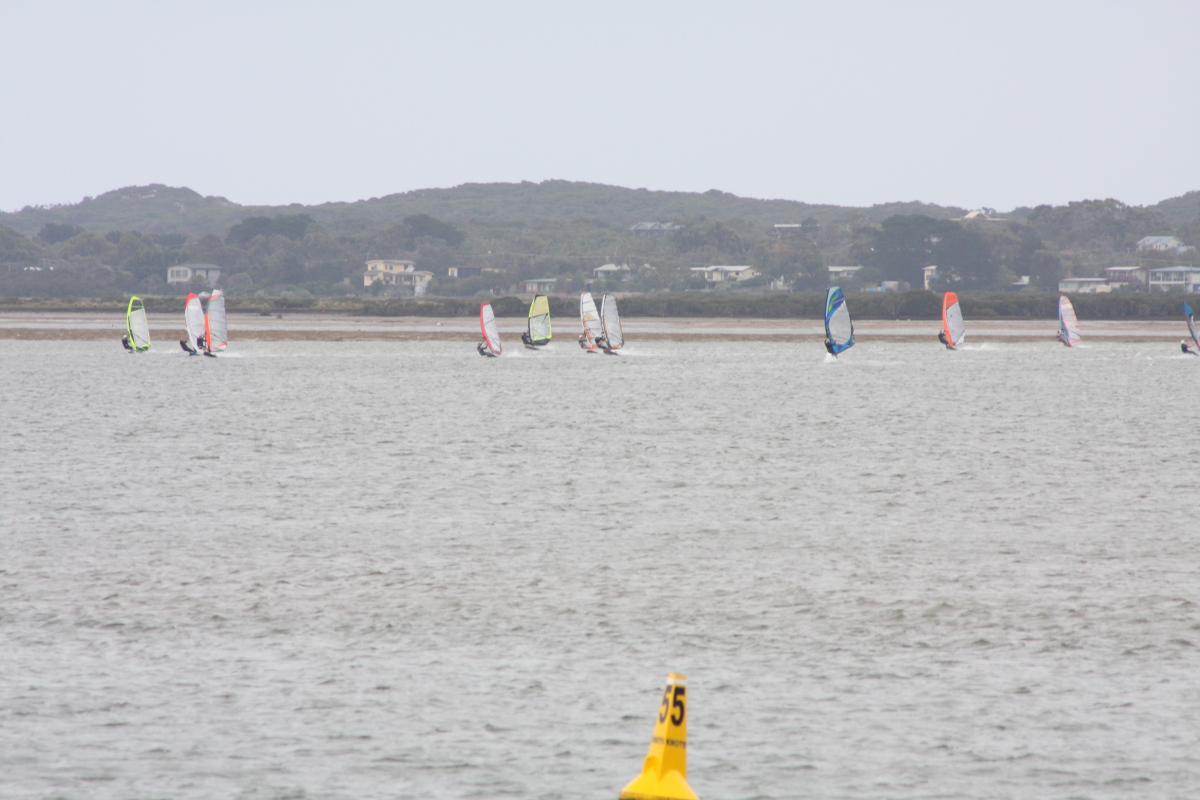 Wow!  That one word sums up the whole day, organised windsurf racing is back in Vic with a bang!

We had a fantastic turnout for the first of IWC’s Race Series.  Over 20 people in total were on the water, 9 in the freerace and 13 in the handicap slalom.  The others were just happy to get on the water and sail.  Thanks very much to IWC’s brand new Racing Sub Committee: Doug, Daffy, Ado, Kato, Jacques & Red for conceptualising the day, and thanks also to the day’s volunteers who made the day run like clockwork: Roy, Postie, Rob & Dan on the laptop with the results.

The wind came in slowly, and after a few guinea pigs went out early the easterly started to build from midday onwards, as Postie’s sage words of “the easterly all comes in on the change of tide” rang true once again.  By 1pm we had a nice 15kts and the call was made for Victoria’s first ever GPS Freerace to be held with a 1:30 start.

Having sought advice from our colleagues in NSW & QLD our race committee had decided on 30min freerace’s with the idea being to get as many people on the water as possible.  There were no restrictions on GPS devices as again the aim was to be as inclusive as possible.  So in true IWC style, with a start time of 1:30 announced most people started coming off the water at 1:25 for a snag & a drink.  Hence, the start time snuck back out to 1:35 to get people back out there.

In a fascinating race there were a number of different strategies applied by those racing.  Pete Johnston & Pete Naz stayed high on the course, using bear offs to try and hit higher peak speeds, Roy the race’s dark-horse stayed lower on the course and with the aid of his weed fin did longer runs along & onto the mud bank in the shallower water.  A number of people were in between, and one of the pre-race favorites Dan seemed a bit in between strategies and with the longest fin in the race (38cm) he found the bottom & went over the front 3 times, thanks to Gippsland Ports for sneakily moving the top red mark ensuring that it was very difficult to gauge where the bank started – you’d think after the first or second time he’d know – maybe he’s not the sharpest tool.

It was great seeing so many boards flying up & down the course. There were a number of other people keen to race who didn’t have a GPS.  We hope to be able to help those people participate in the next race.

So what were the results….. well, taking out Round 1 of IWC’s race series Freerace was: Pete Johnston!!  Full results of the race are following in the table below.

Thanks very much to Dan Cole from Wassup in Chelsea for donating the prize for first place of this race.

This could have been an absolute shambles, but turned out to be great fun!

A buoy was dropped at the bottom end of the course with all sailors convening on the mud bank out in the middle.  The format was simple… race one was a free for all.  Everyone starts at once, races down, gybes and then back to the start position with each competitor receiving their finish position.  Race 2’s starting positions are the reverse finishing order of race 1, with each subsequent race being the reverse order of the previous race.

Dan, Pete & Dan Cole were the standout’s in this format with Dan taking 3 wins out of the 5 races.  However the beauty of this format was that after race one, they were the last 3 to start meaning they had to weave their way through the pack each time.  There was mayhem at the gybe buoy each race with boards, sails & bodies everywhere.  The banter on the water was hilarious – can you really call starboard on someone halfway through a gybe!!???  Col Savage will hereby be known as a bushranger, seemingly coming last on purpose to ensure a clean get away in the subsequent race.

There were many other highlights throughout the day, Jayden christening his new board which Santa dropped off early (and resultingly we doubt Santa will be back for Jay in the next 8 years! Its a nice board!!)  Roy sailed the day with a broken toe after re-damaging it in a practice sail before we’d even kicked off, Ernest seflishly bringing only 2 nice bits of chicken for himself to eat and cooking it whilst we were all watching eating snags, while Dougie seemed in his element – coordinating everything from the safety & comfort of floating next to his board – it was almost like his regular chats in the middle of the inlet except more people were around (and had) to listen to his waffle.

In summary it was a great event.  Race 2 (on 13/02/16) promises to be bigger & better.  Check our events calendar to see what else is coming up and enjoy the photo gallery below with images taken by Rob.