I’m always keen to support other club’s events and the Burrum Windfest has always been on the wish list. Warm weather, SE trade winds and a 4km long speed bank. So this year it was time to convince the family that it was time to do a road trip into the sunshine. Peter and Lari were also keen for a road trip so it became a Pit Crew adventure.  We left home at 5pm as Jen had work commitments and just went north. Made a wrong turn and ended up in Albury instead of Shepparton. Opps. Then the rain started lots and lots of it. Interesting having a road train go past you at 110km while driving through a river. Went along the Newel Hwy past Parkes, Coonabarabran, Goondiwindi and finely Burrum, just a little 28hr drive in the country. 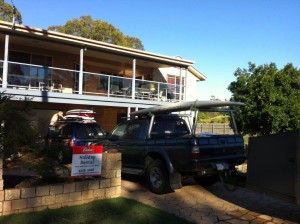 Morning and it was time to meet the locals, sign in and check out the area. Katelyn was very keen to have a go in the comp so a quick sign up to an AWA state and throw on a life jacket she was in too. Wasn’t very happy about the jacket but that’s the rules.

Not enough wind for Day 1 and Justin (Gestalt) was trying to guess the wind gods mind and called it a free sail; a few grumbles from the rabble who wanted to compete. (Who would be a comp organiser?)It was time to get wet in Queensland.

Out onto the inlet with my biggest gear, Carbon Art 66 (110L) and Koncept 8.5, this sail had only been used twice before and one was at Lake George for the 24hr record.

Tough to get going with lots of pumping, but the weather was warm and not a wetsuit in sight. Katelyn in as well but even harder for her as the tide was racing in with an onshore wind and she was pushed into the harbour. The 3.5 Dragon Fly and my old Ab Slalom board just didn’t have enough punch to keep up wind. 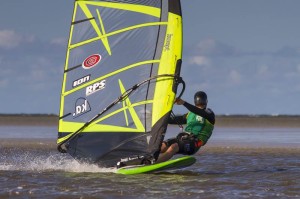 The wind turned up and the locals were excited, still light by our standards but very sailable. Onto what was becoming my Queensland speedsailing setup Sl66, Ka8.5, Venom 40. Still no SE wind but with Burrum there is always a bank to play with. The Northern run is a bit like Area 45 with out the curve, lots of brown water too. Burrum usually has clear water at this time but as we had bought the drought busting rain everything had turned into Area 45 brown.

Bounced off lots of hidden sandbanks and just couldn’t go fast, fighting both the rig and board. Ended up having a attack of the grumps. Luckily Pete was around and being a caring supportive friend mentioned something about “Princesses” and “Hardening up” and “Softy”. Still couldn’t get it together so I just chased Katelyn around who was having a great time.

We stayed on this run for the rest of the week with the wind getting to about 15 kts with my board maxing out at about 30kts. I was a bit off the pace all week and I only solved the issue on the last day, not enough down haul (20mm)  Top speed was Vando at about 32kt, kicks my butt again. 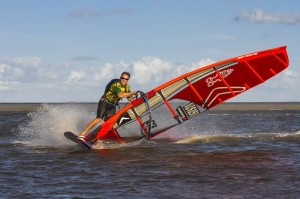 Katelyn impressed everyone with her sailing skills and that she rigged and carried all her own gear without adult help. Sound like a very big tick to her instructor ….Joel. She came so very close to planning her board and her confidence was huge. As the only junior in this years comp she cleaned up in the prize pool bringing home a new boom and a ProLimit vest.  Bring on next year Katelyn.

We didn’t get to sail on the usual bank, the water was unusually brown, and the wind was a bit light but that’s windsurfing. We did meet some great people, have a well run and fun comp and see a great part of Australia that everyone should visit.

From Burrum we left Pete and Lari as they went sth and we went north another 14hr to Ailey Beach and the reef for a week before coming back towards home.

In total we travelled 9000km in 4 weeks played in 3 states, saw a small part of Australia and gave the kids a sense of just how big Aus is and had a great holiday.

See many more of you at Burrum next year!

(thanks to Justin (Gestult on Seabreeze) for the pics