Yep – the third time he has run his INtuition @ INverloch and nothing changes. 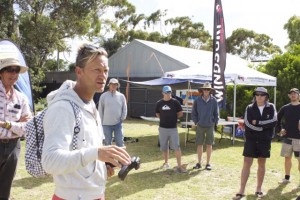 Guy operates at 150kph and sweeps all in his path like a passing storm.  “Teaching windsurfing and fun times in exotic locations around the world” he flashes his boyish smile “it’s my job, tough gig but hey someone has to do it!”  And do it he does.

He hits the ground running or cycling in this case up to clinic opening at the Angling Club Car Park.

Within 5 minutes he knows everyone’s name and has them listening intently to every word of wisdom he lets out.  Guy has a unique way of teaching with catchy phrases that give meaning to movements with the body, board and sail.  Terms like “The Growler”- I can see and hear past and present clinic guests crouching low emitting a growling noise, Boom Shaka, Drop your guts, Ooh Aah and many more to make the learning process fun and memorable.

The three wise weather gurus (Guy, Mick and Dan) decide Area 45 Mahers Landing is on.   Guy holds them off the water until lunchtime getting them practising some basic drills and rigging techniques.  You can see they all want to hit the water with the wind up but Guy wanted to arm them with some new moves before he sends them out.  The wind is ESE but uncharacteristic for this spot the wind has considerable holes in it and is gusting from 10 – 20 kts making it a little difficult for the guests.  They all make the most of it and Guy comes in smiling with some good video footage for analysis the next morning.

The club has a surprise for the guests that night with a traditional welcome and smoking from a member of the local indigenous tribe the Boonwurung followed by a spit roast all under the stars at The Rotary Park.

Morning starts with Etsuko running a stretching class for all the weary bodies from the day before then off for video analysis at the Jepson’s place.  Again anxious windsurfers as the wind increases through the morning but Guy wants you to practise The Growler yet again, ooh aah, boom shaka and the Twist then you suddenly realise he has given you all the successful moves to complete the illusive Carve Gybe.  You can see the light bulb moment amongst the guests as the master sits back and smiles. He pulls the trigger and lets them hit the water on what will be one of the best clinic days over the three years this event has been running.  Solid SE wind of 15kts with a run of flat water out from the Rotunda down to the Yacht Club.  The sandbar near the Yacht Club forcing the guest to attempt a gybe or do the Inverloch step gybe – get off your board in shallow water, turn it around and get back on – very sophisticated!  Video cam set up half way down the run capturing some brilliant footage for the next morning’s analysis.

The mystery night – again with some creative thinking from club members a special night was planned as we took 20 weary bodies for a mystery tour.  State Coal mine in Wonthaggi for dinner hmmm that is ok but what is all the guff about a special night……then Rabbit walked into the room with full camouflage gear and a laser gun.  We are off for a game of laser tag down the mine shaft!  Funny how a bit of competition re invigorates some tired bodies and gets the competitive juices going.   BTW – Guy was recorded as being killed the most!

Everyone is getting into the swing of things especially as Tash Worner baked up a storm with some fresh scones jam and cream for munching whilst we were analysing all the great moves on video from the day before!

Light wind day today with lots of tired and muscle weary guests inwardly celebrating the fact but Guy was relentless getting them all out on the water practising their new found skills yet again.

In the car on the way to the airport – “Well Guy 2016 – are you back?”…No hesitation  “Damn sure I am.  One of the best teaching places in the world, flat water and I have a club that does all the extra bits to make the clinic more memorable.  Bookings are open!!”…

Also to our sponsors – SHQ for gear for Guy and one of our international guests.
Guy is a big convert for the Magic Ride.

2 thoughts on “Hurricane Cribb has Passed!”